Wow, I am on time! ~A year ago today, this blog was born :) Ironically, I have an endo appointment this afternoon, weird...

I started blogging to connect with others, to share my story. A little over a year ago in the beginning of December 2012 I was at a tumor immunology conference in Miami. Needless to say, sometimes at conferences (especially as a graduate student traveling by herself to a city she's never been to) my time largely consisted of exploring the city, and also wasting time by surfing the web on my phone during boring events, or lengthy train rides. It was then that I began to read Kerri Sparling's blog sixuntilme.com and I couldn't stop myself. On the way back to the airport on the subway I literally drained my whole battery reading story after story of Kerri and other people living with or loving someone with T1D. At that time (as has been in all my ~6 years since Dx) I was extremely private about the fact that I had T1D. I would go as far as to day that on some level I was ashamed of it and to a degree felt out of place in the world (and thought others would see me differently and in a negative light if they knew). I guess a big part of it was being completely "normal" (doing things others did) for so many years (I was diagnosed at age 18) made me feel very strange and unlike myself as a diabetic. Over the last year, I took advantage of free counseling services through my university (all schools should have that!) where I discussed in  depth many things, one of which was my self-image as a person with diabetes. I must say that I have come a long way in self-acceptance and confidence, which has in turn allowed me to share my true (type 1 diabetic :) self with other people. Friends were shocked. People I had known for years had no idea.. And while sometimes I would have to field some uneducated questions concerning what I should be or shuold not be eating or whatever, I still felt much more at ease and was largely unrattled by all of my "coming out" moments. The first post I wrote was titled: "T1D: Coming Out". In the last year, I have shared my chronic condition with at least 8 people (which is much much more than in any of the last 6 years). The thing is that I don't think it was so much the growth in age (18-25), nor was it 12 months of counseling that got me there. It was in fact reading the stories of others in the DOC, connecting with them (online and IRL), and realizing that I was not alone that did it for me. So for that DOC I sincerely thank all of you!

Moreover, I have learned that the DOC can be extremely (selflessly) helpful in times of need. I will share just as few examples of the kindness of strangers in the Twitterverse that will never be "just strangers". I can't think of a better word than friends, but it is different. I haven't been around here long enough, nor do I have a lot of funding to travel around to meet PWDs IRL, but nevertheless the compassion that was shown to me in the last year was nothing short of awesome and amazing. Here are a few recaps:

- Last February I was at an eye doctor's appointment, where in reponse to my honest answer about the last A1C (7.6), the "doctor" shouted at me: "WOW, so you are an UNCONTROLLED DIABETIC! Do you even know that Diabetes is the leading cause of blindness???!!!" (No lie, that was EXACTLY what she said). Then, she proceeded to tear me apart for my high morning BGs. At first I tried to explain to her that I understood all this (and more), that I was doing the best I can. I took out my Dexcom (she did not know what a CMGS was!!!) trying to explain to her how hard I was working to manage my condition. All I got was something like: "Well, you need to be doing much better or you will get complications." OK. Then I kind of snapped. And may have raised my voice. And then I tweeted all about it: (the replies are not shown here but there were many, and they were all expressed with such comradery and support that I almost cried happy tears ;) 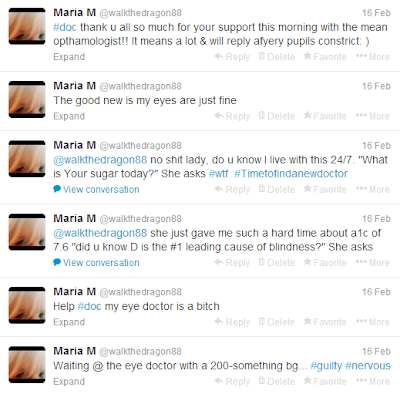 - A few months later, my Dexcom receiver ended up in the toilet (you know)... I tweeted again, getting advice from people about putting it in rice,etc. That worked, and was great advice, saving the function of a very expensive device. What was really amazing though was the woman who was willing to send me at no charge her son's old Dexcom. I was very touched my her willingness to help a stranger and her compassion and grace when she DMed me that "I don't believe in reselling D supplies." (I offered to pay what I could and she wouldn't hear of it) Thankfully, my Dex is fine, and I didn't have to accept the gift, but this was another moment that solidified for me what a tight-knit and LOVING community this is...

- Fast forward a bit and my motherfucking! ins. co. decided to change things up and rebill (read: Back-bill) my sensors, turning out to cost me almost twice as much as expected. As a graduate student on my measly TA salary, I cannot afford sensors for my Dexcom system anymore (and now owe like $500 for shit I've already used). I can barely afford test strips and insulin. I tweet out in hopes of finding someone who switched to a G4 and might have some 7+ sensors they don't need. What do you know? Sensors along with a backup Dexcom trans. + receiv. coming in the mail this week. I am so excited to use them and extremely grateful to the gentleman who provided all these at no cost.

So, THANK YOU DOC. I love you all and would do the same for you... When I get all rich after my Ph.D. (ahahaha) I will definitely donate D supplies and fund charities and fly out to meet more and more of you :) Maybe I'll even switch from cancer reasearch to T1D, who knows?!