Let's pick up where we left off (and if this post sounds more like a diary entry or a bout of verbal diarrhea, I apologize in advance)...

1. The Move
We moved (about 800 miles NorthEast). With 3 dogs. And a cat. Two Cars & a moving truck (1 car in tow). What we did not consider is that what should take about 13 hours of driving (+ stops) would take about 18 hours of driving (+ stops) since the 18' moving truck really can't be pushed past 60 mph. But we made it, and it was fine. And my BG didn't go over 200 mg/dl, so that was good too (even though I ate a hash brown at the Waffle house as well as very questionable veggie chips from a gas station).

2. The Pregnancy... and Diabetes
It was good that I saw my MFM team exactly two days before we drove. I was reassured that our girl was growing perfectly, still in the 30% percentile, with steady growth and no red flags. I was also pleasantly surprised that my A1C came back at 5.4% (I thought it would be higher, although I knew it would be under 6%). I was told that I did not have to wear support stockings on the drive, which was also very good. Blood-sugar wise, the days leading up to the move were challenging. I was packing non-stop, and carrying the less heavy items to the truck, etc. so it was basically non-stop exercise that caused me to need to eat uncovered carbs to ensure I had no lows, but overall it was fine! (Shout out to B's mom aka my second mom, who stayed with us for a week and helped us pack and drive the truck. Seriously guys, thanks for not making me drive the truck - I feel much more comfortable driving my little Honda. Also a shout out to B, who defended his disseration and is now a doctor too).
Once we actually got settled, the insulin resistance kicked in (right on schedule I guess - hello 23 weeks!) For a few days I even entertained the thought that maybe all my insulin had slightly spoiled on the drive (aside: I used icepacks and styrofoam, ran the AC most of the time, and frequently checked for temperature as well as for any sign of freezing. So I am pretty sure that's not it). Finally, I started making some adjustments, increasing my Levemir TDD from 13 to now 15 U, and changing my I:C from 1:8 (1:7 at breakfast) to 1:7 for most meals (1:6 at breakfast). It seems to be a bit better. I also know that I am guilty of not waiting to eat until I am in the normal range always, and that I need to get into the habit of consistent exercise once more. But, maybe I should also cut myself a break - my A1C just two weeks ago did come back at 5.4% after all (my personal best since diagnosis). It's just that I really really want to keep it there and have definitely been frustrated by a string of days (or weeks now?) where I seem to be in the mid (or high) 100s waaaay more that I would like to see. Yes, I should cut myself a break, because these past two weeks also involved Dexcom-free beach time, and A LOT of eating out... Here is this morning - let's hope we can keep that (impending) breakfast spike at bay... 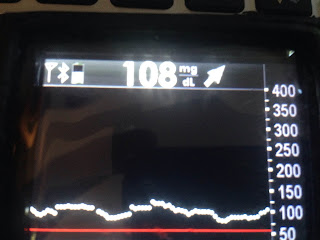 On the insurance front, we were happy to hear that B got to start his new job a day early so our benefits could kick in Aug. 1st (instead of Sept. 1st) meaning I don't have to be without health insurance this month, which is also very good... I have started the process of setting up medical care for myself here in New England.. I started up with a practice in NH, which I now have to start re-thinking because....

.. In Boston! Well, actually I got two offers. At 5.5 months pregnant. Which I didn't really expect, but I can't help but be a little flattered (not to mentioned freaking out a little a lot)! Do they know I am pregnant? Who knows, they suspect I imagine. But I intend to come back promptly, and if I get fired - oh well I get fired (although I am pretty sure that's illegal?) Anyway, I have never done this before and I have no idea what I am doing!!! Anyway, I had my little back-up job offer in the bag for over a week now (part-time teaching at a small college). but yesterday afternoon I accepted a verbal offer from Brigham Women's Hospital/ Harvard Medical School for a full-time postdoctoral research position... I would be studying Multiple Sclerosis (which as many know is an autoimmune disorder). I was told that I could also come up with ideas for my own research projects in autoimmune disease (hello type 1 diabetes research?!) and they would fund my pilot experiments as the next steps (over the next 2-3 years) would involve gathering funding to start my own lab. Naturally, I couldn't not accept (Have I mentioned I will be across the street from Joslin?!). The only heistation is the pregnancy, and my dogs (as we now both have a very long crappy commute, which will probably change early next year, once we actually buy a house instead of renting!). However, I have a dog walker coming to meet us this evening, and although I have never done this before I hear people get pregnant all the time (it kind of makes the world go round), so solutions are in progress.. Hopefully I can prove myself quickly and they will understand/ not fire me for taking leave so soon after starting (aside: I really hope I can make it past the 3 month probation period to ensure I am covered by the MA maternity leave law, but I only have so much control over what happens next...)

So there. But the most exciting thing has been feeling my daughter kicking me. I have been feeling her since about 16 weeks, but I have an anterior placenta, which cushions the movement, so until this past week any movemenet I felt has been very very subtle. But for all four days of the month of August, she has been ACTUALLY kicking me (I can feel and see her from the outside!), which just made things feel so much more real....

And now I have to go write a bunch of emails. Alas, back to adulting.

Thanks for listening ;)
Posted by Unknown at 5:34 AM