Some people track every bite they eat, some might not remember at lunch time what they had for breakfast or if they even had breakfast. For one day, document everything you or your loved one with diabetes eats and drinks. The good, the bad, the ugly, the proud, the ashamed, the...whatever. We promise not to judge!!

Breakfast: During the week - it's a variation of the same thing... Because I have a long commute and eat in the car - at 6 am. Typically, it's a 2 egg + cheese breakfast sandwich on either a low-carb wrap or pita (10-15 g carbs tops), or more recently it's actually been a bagel thin (~20g carbs). Also, sometimes I make low-carb waffles (http://alldayidreamaboutfood.com/2011/11/almond-flour-yogurt-waffles-low-carb-and-gluten-free.html) - and I totally don't follow the instructions, I just mix everything together at once, and I never have xanthan gum, and it still works out!
These are even lower-carb - about 7-8g depending on the size you make them, so I usually like to also add a teaspoon of jam in there and usually 1 fried egg with cheese... And there is always a cup of coffee with heavy cream - YUM! I pre-bolus religiously for breakfast, and these ones are almost guaranteed to produce a straight line :)

Snack: Around 9 am or even earlier, I like to have a Kind Bar. I like the Nuts+Spice ones, because they are lower carb - about 10g net carbs only, and they are very BG-friendly for me. Recently, I learned they have a bunch of new flavors and the one pictured below is my favorite right now - you can really taste the mocha! 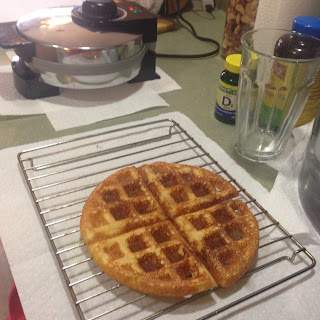 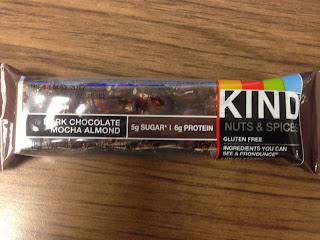 Lunch: Most of the time lunch is salad + protein (~12-15g carbs). If it's not loaded with carbier veggies like tomato and carrot, I might throw in some croutons... On the left is one with steak, and on the right in one with chicken. I like my salads to be "Greeky" which means feta cheese and olives. I make my own dressing and I am obsessed with it (1:1 EVOO: red wine vinegar + S+P, oregano, and garlic power to taste). Alternately, I bring my dinner leftovers. Pictured below are Brussels sprouts, spinach,  and kielbasa. Sometimes, there might be some french fries too or something, but not too many (bringing up the carb-count closer to 20g in that case)... 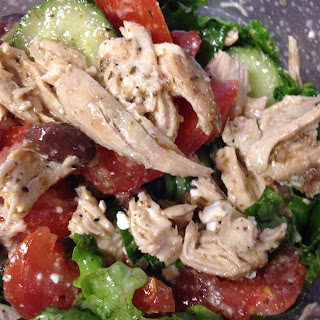 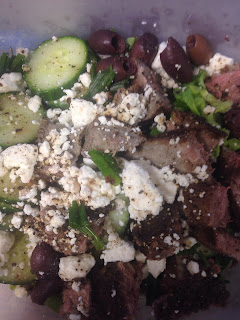 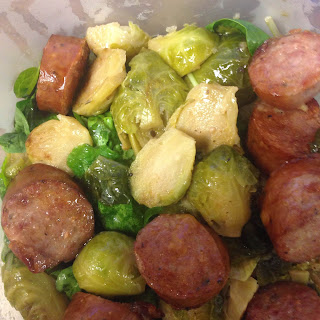 Snack: By the time I am back from work around 2:30-3PM I am ready for a snack. Lately, I have been eating ice cream. I bought those small Breyer's vanilla and chocolate cups (11g carb each) and I like to have 2 of them with almonds or berries (totaling about 25g carbs). Alternately, I have plain yogurt with berries and nuts (~20-25 g carbs) - it's huge - I will do like 1 cup yogurt + 1 cup berries lol. Sometimes, I mix it up - for instance yesterday, I had a piece of toast with kielbasa, mustard and pickles and then 1 Breyer's ice cream cup (altogether working out to 25g of carbs).

Dinner : 6 pm(ish) and I am ready for dinner. This is most variable. Sometimes, I like to have breakfast food - e.g. toast, scrambled eggs. Other times it's a standard protein + veggie + starch (usually 1/2 serving of starch for me though) - on average I would say 25g of carbs here. Yesterday (for today), I made Crockpot chili with turkey and black beans. It has been forever since I have had chili, and I estimate about 130g of carbs total in the pot, and I *think the pot is about 8 cups so when I try it later tonight I will try bolusing for ~15g of carbs per cup and see how that goes. I will probably add sour cream or shredded cheese to it and have it with a small piece of toast (maybe garlic toast) - OK Kelley - you have made me crave chili and garlic bread!!! I am hoping this will work out to be about 25-30g carbs...

Snack? (I eat a lot don't I? lol): Most of the time I don't have this snack, it really depends on when I had dinner and if I feel hungry. Last night, I had about 12g of SmartFood white cheddar popcorn. I also was running a bit low so ended up having a couple of squares of white chocolate to keep my bg stable overnight.

And there you have it - a day in the life!